What is the common denomination today? 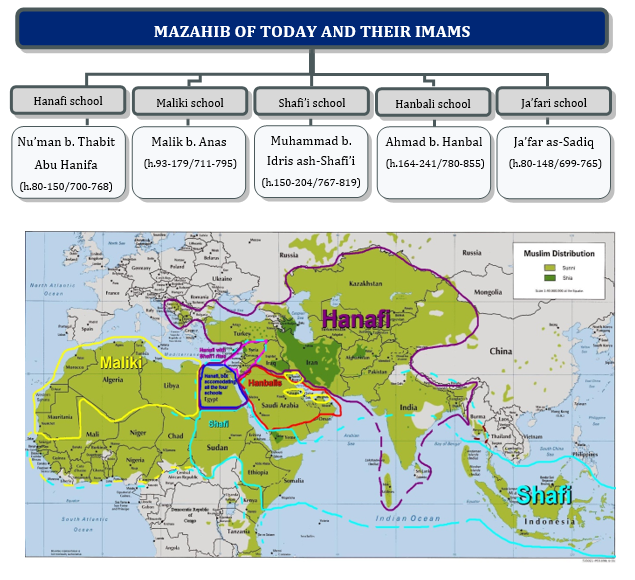 Mazhab, which means path or way (followed), in context means “the path of fiqh encompassing the ijtihad and understanding of a particular mujtahid.”

Conquering new lands lead to the expansion of Islamic boundaries. Followers began to collect (group) around scholars such as Abu Hanifa, Imam Malik, Imam Shafi’i and Ahmad b. Hanbal, as all of them were acquainted with deep Islamic knowledge and fiqh. Over time, these groups turned into fiqh schools (mazahib).

The goal of these imams were to enlighten the Muslims; thus they performed ijtihad in the light of the Qur’an and Sunnah, in order to respond to their needs. The imams never claimed to be founders of a particular school of thought, they never obliged people to follow them or spread their message.

The mazahib that have survived with success and still have followers are: The Hanafi, Shafi’i, Hanbali, Maliki and Ja’fari schools. Let’s take a look at these mazahib more closely:

His full name is Nu’man b. Thabit b. Zut’a, however he was addressed as Imam A’zam Abu Hanifa. His origin was from Khorasan, however he was born and raised in Kufa and studied there. He passed away in h.150 in Baghdad. He is the first imam of the Hanafi mazhab. In this school, Abu Yusuf is regarded as the second imam and Imam Muhammad the thir

Abu Yusuf was born in h.113 in Kufa, and died in h.182 in Baghdad. He served as a qadi during the times of three Abbasid caliphs; Mahdi, Hadi and Harun al-rashid. The first person who gained the title “qadi’l qudat” (judge of judges) in Islamic history was Abu Yusuf. His most important book was titled “Kitab-ul kharaj.”

The Areas in Which the Hanafi School Became Widespread

The Hanafi school gained dominance in all the lands that were controlled by the Abbasid Empire. The fact that Abu Yusuf was “qadi’l qudat” during this time, lead to the popularity of this mazhab. Today, it is the dominant school in parts of Asia (such as Turkey, Pakistan, India etc.), the Balkans, Caucasia and North Europe etc. It is estimated that 40% of the Muslim population today follow the Hanafi school.

Imam Malik was born in Madinah in the hijri year 93. He passed away in 179 in the same city. During his studies, he was the student of Rabi’aturra’y who was a ra’y scholar. He also accumulated knowledge from Abdurrahman b. Hurmuz. Additionally, he took lessons from Nafi’, Ibn Shihab az-Zuhri, Said b. Musayyab, Abu’z-Zinad and Yahya b. Said al-Ansari

The areas in which the Maliki mazhab became widespread

The Maliki mazhab gained popularity mostly in Africa (eg. Tunisia, Algeria, Morocco, Sudan, Egypt) and Andalus. In Hijaz, it is also possible to find a small trace of its followers. The Maliki school was the official mazhab of the Umayyad administration, thus it had an impact on their people. Along with North Africa, it also gained popularity in South Africa and America. It is estimated that 20% of the Muslim world follows the Maliki mazhab.

His full name was Abu Abdillah Muhammad b. Idris ash-Shafi’i, and he was born in h.150 in a village called Gaza. He died in h.204 in Egypt. He was from the lineage of Quraysh. In Madinah, he met Imam Malik and learned fiqh from him, by also being exposed to Imam Malik’s Muwatta. After some time, he travelled to Yemen and engaged in academic discussions with Omar b. Abi Salama who was the student of al-Awzai.

He went to Baghdad three times and took fiqh lessons from Muhammad b. Hasan ash-Shaybani. After a short while, he returned to Makkah and started to give lessons. He spent the last years of his life in Egypt, and spoke to Yahya b. Hassan who was the student of al-Lays b. Sa’d.

Imam Shafi’i was the first scholar to write about fiqh methodology. His book was called “ar-Risala.” While Imam Shafi’i resided in Baghdad, he wrote a book called al-Hujjah in which he collected his fiqh views. And in Egypt, he compiled Kitab al Umm where he collected his more recent views. He also authored two more books titled “Ahkam-ul Qur’an” and “Ikhtilafu’l hadith.”

The areas in which the Shafi’i school became widespread

The Shafi’i school was especially dominant in Egypt, as Imam Shafi’i spent the last period of his life here.

Ahmad b. Hanbal was born in Baghdad in h.164, he was a faqih and scholar of hadith from the ahl-hadith school. He memorized the whole of the Qur’an when he was a child. He studied fiqh from Imam Muhammad and Imam Shafi’i. He did not agree with the arguments that “the Qur’an is created,” thus he was tortured and imprisoned by the administration.

Ahmad b. Hanbal collected about 40,000 ahadith in his book “Musnad.” He also wrote a book called Kitab al-ilal.

Areas in which the Hanbali school became widespread

This mazhab is especially widespread in the Hijaz. Today, most Saudi Arabians follow the Hanbali school. It is estimated that 5% of the Muslim world follows this school.

The largest branch of Shi’a is the school that encompasses the views of Imam Ja’far as-Sadiq.

He is a respected scholar that has been praised by Sunni sources too. Scholars such as Abu Hanifa, Imam Malik and Sufyan al-Thawri took lessons from him. The Ja’fari school is generally in agreement with other schools. In some of its views it is similar to the Hanafi school, however in other matters, such as faith, it differs from the Sunni schools and has not been considered from ahl us-Sunnah.

Some aspects in which it differs from other schools: Wiping over bare feet during wudu’, prohibition of marriage with Christian or Jewish women, addition of “ash-hadu anna ‘aliyyan waliyyullah” to their adhan, joining duhr and ‘asr prayers and joining maghrib and ‘isha prayers (jam’ taqdeem).

The areas in which the Ja’fari school became widespread

This school became most effective in Iran and countries bordering Iran. Countries that contain a Shi’a (Ja’fari) population are: Iraq, Azarbaijan, Pakistan, Lebanon and Palestine. It is estimated that 10% of the Muslim world today follows the Ja’fari school.

5. The Zaydi school of thought

Zayd is the son of Zaynal’abidin and grandson of Husayn (r.a). He was a scholar of fiqh from the tabi’un generation. Following provocations, he was martyred in the war with the Umayyad Caliph Hisham b. Abdulmalik.

He was the first person who has written a book about the science of fiqh and he conveyed his knowledge to many scholars. He wrote a book called “Majmu’ ul-kabeer fi’l fiqh.”

Situations that Invalidate The State of Wudu

Giving Zakat Directly or Through Government