What is obligations of a mukallaf? What does mukallaf means in islam? 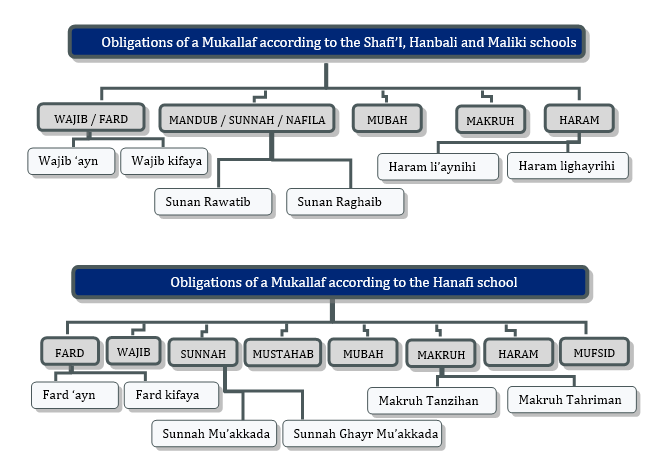 As can be seen, scholars have used slightly different terms for some categories. This difference does not indicate a clash of mazahib in any way, as all the mentioned scholars have approached the matter with the same spirit, caution and care. The only difference is the terms used for classification.

For example; while the Hanafi school puts forward that Salat al-witr is wajib, the Maliki, Hanbali and Shafi’i schools regard it as a Sunnah. If we take a look more closely, the witr prayer is actually not classed under the same category as the Sunnah prayers, it has been described as an emphasized prayer (that is not fard), performed after the ‘Isha prayer.[1] In this book, we have taken the classification works of the Shafi’i, Hanbali and Maliki scholars. Their wajib category is named fard by the Hanafi school, and their mandub is termed as Sunnah and Mustahabb by the Hanafi school.

The Definition, Importance and Benefits Of Fasting (Shafii)

Festival Prayers and How to Perform Them (Shafii)

Tarawih Prayer And How To Perform It (Shafii)

The Way The Prophet Dealt With His Family

Who Will Be Saved From The Fire of Hell?

The Doors to Hell